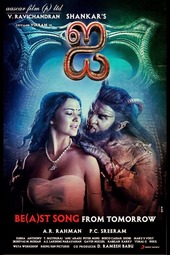 
The biggest movie in recent times, Shankar's I is finally here. And, it is yet another proof of the capability of the director for whom even big or bigger won't cut it. His latest movie is his biggest, as of now (with no doubt that this can be said of his next movie as well - such is his vision and ingenuity).

In I, he has taken up a genre that's remarkably different from his previous flicks - a romantic thriller. However, the screenplay, still, can be fitted into his typical pattern. Also, he makes sure that he puts forth some succinct messages in the areas of cosmetology, and medical negligence.

Coming to the I-man, Vikram, he doesn't take time to warm up, and instantly wins over the audience right from the minute he hops onto the screen - as the hunchback. Entirely covered under a world-class prosthetic makeup, the actor emotes more via his eyes, and also with his body language and posture rather than his curbed up voice.

In fact the loudest claps from the theater was when the hunchback character is given a minute of hope, letting him catch a glimpse of a long lost happiness, before taking it back in the next, leaving him pendent all alone in the middle of the road. Claps for his passion and dedication! Also, watch out for the scene where Vikram matches muscle to muscle with some of the best professional body builders.

The other clapping moments were reserved for the Shankar-brand inventiveness such as the Royal Enfield morphing to Amy, and when Vikram's shoelaces get tied off itself with him just flapping his legs. And, the stunt sequences and also his songs! The thing about Shankar is that he never lets these sequences become a smoking-time for the audience. He invests so much into these moments that would make the viewers to stay. And, with PC Sreeram behind the camera, these sequences become mini-movies. The stunt sequences in particular, be it in China or India are grippingly shot. Art director Muthuraj is subtle even in his grand sets, speaking of his artistry.

Also, the non-linear narrative, which Shankar has used to intrigue suspense, serves to elucidate the effort put by his hero, as the tale shifts between the actions of the wafer-thin hunchback and the big and muscular bodybuilder, Lingesan.

Even though, it's Vikram, who is in the center of frame throughout and who steals the show, Amy Jackson's part, as a model, deserves commendation too. The entire plot is driven by the lead protagonist, Lingesan's love for her.

Hence, for the plot to work, this love had to be a two-way street. With Vikram holding a solid ground on one end, Amy had to deliver on the other side. And, she does! Initially, at times, her dubbing does feel a bit tacky. However, around the halftime, when she gets to converse the 'Madras slang', she hits the perfect chord!

Santhanam doesn't have much work to take the plot forward. But, in the end, when Shankar ties all the loose ends, after a three hour long  deal, like the Boss he is, Santhanam is given a free run to deliver his one-liners - his trademark Punch lines.

Music composer, AR Rahman and Shankar combo has always worked and in I too, their winning streak continues.

The problem with I is that the story becomes predictable beyond a point. The villains are weak, the love portion in China extends more than what it should have and though songs are brilliant stand alone, they do have an impact on the pace of the narration.

Ultimately, it's an amalgamation of Masters at play which works to a larger extent because of their huge efforts.