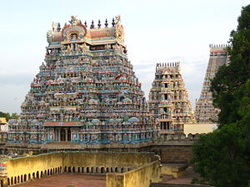 Sri Ranganathaswamy temple
Trichy district is famous for many ancient and popular temples and religious institutions. The bus network of Trichy is well developed and most of the city readily accessible by bus at reasonable fares.

The National Institute of Technology & the Bharathidasan Institute of Managment are located near Tiruverumbur, 14 km from Trichy.

BharathiDasan University is 20 km from Trichy towards Pudukkottai Road.


Eat
Maakali Kizhangu is the special item in the City.This root is available in the Month of Markazhi (December) .this root can be prepared into pickles.