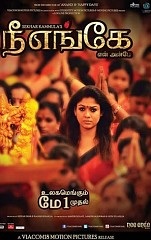 Handling remakes is always a tight rope walk for even the most proficient among directors, more so if you are remaking a cult film such as Kahaani. Released in 2012, Kahaani is seen as among the best thrillers in recent times featuring a pregnant female protagonist who is out in search of her missing husband in Kolkata. The deadly twists and turns in Kahaani were much enjoyed and are discussed even now.


In Nee Enge En Anbe, the director Sekhar Kammula has made key changes to the story and to his credit, he has invested a lot of original touches and hasn’t brought any disgrace to the much celebrated original. Nayanthara isn’t pregnant here and Hyderabad is the scene of action. Vaibhav Reddy plays the unassuming cop who helps her out in her search while Pasupathy plays the senior law enforcement officer with much authority and intensity.


The lead trio is the biggest plus of the movie with Nayan proving that she can carry off a movie on her own with her stunning screen presence. The Malabar diva looks as beautiful as ever in graceful costumes and plays this author backed role competently. Vaibhav Reddy is earnest while Pasupathy’s presence gives the movie a lot of drive and intensity in the second half. The other support characters such as the over-enthusiastic hotel manager, the cute room boy and the contract killer Bob, are all adequate and do their little parts with distinction.


Nee Enge En Anbe is technically superior, thanks to the pounding BGM score by veteran composer Maragathamani and the excellent camera work by Vijay Kumar. The tension and thrills are lifted several notches by the thumping music score, which also features a few montage tracks. We get to see a lot of candid shots of a crowded Old Hyderabad and Vijay must have pushed the limits to catch all this outdoor action in the best manner possible. Like the original, ‘Nee Enge’ also features lots of scenes of religious revelry and they have been filmed in a grandiose manner.

The dialogues, both the subtle ones and the powerful ones, are another plus point. Watch out for the first confrontation scene between Nayan and Pasupathy at the police station.


On the downsides, ‘Nee Enge’ features too much Telugu without subtitles and certain key moments and dialogs don’t make the required connect. The film also suffers from the total lack of nativity with respect to the Tamil audiences, due to the abundance of Telugu and the Hyderabad milieu. Also, the first half in particular is pretty flat, before the redemption after the intermission.


Though the film is being talked about as a bilingual, there are plenty of scenes (particularly the long shots and even some close-up ones) where we can notice the lip-sync of the actors going awry, as the corresponding Telugu lines have been dubbed into Tamil.


At the end of it all, after a gripping second half you may be left with some key unanswered questions. The director could have tightened a few such loose ends.


On the whole, Nee Enge En Anbe scores as a remake which is significantly different from the original. But the deadly impact created by Kahaani isn’t to be felt here.


Verdict: Comparisons with the original aside, a decent thriller with Nayanthara in fine form
Powered by