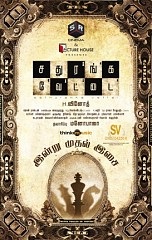 Our theaters witness the release of plenty of movies week by week. People tend to categorize movies into different genres and are often turned off when they get to watch similar movies over and over again, labeling them as clichéd movies.

However, the word cliché plays a major role in Sathuranga Vettai, forming the crux of the movie. “Money is a very clichéd term. People get to hear the word over and over again, but are yet not bored of it. That is the power money has over the other clichés in life.”

Well, H. Vinoth, the director of the movie, uses this line to etch out a considerably non-clichéd movie that ventures through a few true life incidents.

The movie is based on conning, packaged with some drama along with some occurrences that have been happening over the recent past.

Natraj Subramaniyan (Natty) the protagonist plays the role of Gandhi Babu – a name given by his mother so that he remains as honest as the Mahatma he shares his name with. Unfortunately, a few consecutive incidents in his life push him to change his policies and attitude towards life, showing injustice to the person he is named after.

Talking about names, there is an interesting element in the film that is named “Ilayathalapathy Vijay” and a few events that occur after the naming ceremony are both hysterical and thought provoking.

The animated representation of Gandhi Babu’s flashback story and the idea of having chapter names for every segment of the film are attempts that have been sketched out well, taking the standard of the film a step higher.

Natty has done an efficient job in holding the movie together with his neat and timely dialogue delivery. Amusingly Gandhi Babu is not someone who whacks people mercilessly, throwing them away single handedly. The character does not fight back even after being beaten up multiple times. A lot of people can relate to the story as it covers a lot of things that they would have probably fallen prey for. Special mention for the 'Rice Pulling' episode of the movie, for its writing.

Vinoth’s dexterity in coming up with intelligent moves for every con sequence deserves a huge round of applause.

K.G Venkatesh’s hard work in the cinematography department can be noted, especially with some beautiful top angle shots at different intervals in the film. Sean Roldan’s music thrusts the movie upwards, especially a particular flute piece that is played through some of the portions, including the climax.

However, one might get the feeling that the movie could have been trimmed a little more. Melodrama in the film could also have been controlled to make it a better arrangement altogether. Though the screenplay is pretty taut, the magic of a thiller seems to be missing.

Produced by N. Subash Chandra Bose and Mano Bala, Sathuranga Vettai has many nice chapters which could have been a little more sleeker affair.

Verdict: A neat compilation of real life incidents, treated in a considerably engaging manner
Powered by