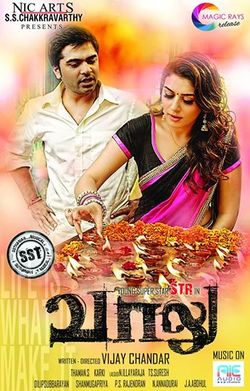 STR’s long awaited Vaalu is a romantic mass masala film which will satisfy his die-hard fans as their matinee-idol’s energetic screen presence along with Santhanam's witty one-liners saves the show.

Sharp aka Vaalu (STR) is a carefree jobless youngster who leads his life happily without any fear or worries. Just like any other decade old Tamil film, here too, Sharp sees Priya (Hansika) in the rain and immediately falls in love.


Priya reciprocate his love instantly and is impressed by Sharp’s good nature. When he proposes, Priya confesses about her parent’s decision to get her married off to a maternal uncle Anbu (Aditya), who is a powerful thug and businessman. The rest of the film tells us how Sharp wins over Priya!

The problem with Vaalu is that there are no twists or turns and the love between the lead pair who shares a great chemistry on-screen goes on and on till fatigue sets in.  Three year delay in production is very much evident as both Hansika and STR looks plump and thin in different scenes.

It’s a delight to see STR and Santhanam’s comic chemistry which is not outdated and laughter is unlimited and unending till the end. Some of the cleverly written dialogues by Vijay Chander and mouthed by STR are smart.

Performance wise, its out and out, STR show. Justifying his character name ‘Vaalu’, STR looks super energetic and just like Hansika says in the film—STR’s biggest strength is his dialogue delivery that he single handedly carries the film on his shoulder. Hansika looks cute and does her best to lift the film.

Naren who acts as STR’s father steals the show while Kannada villain Aditya has nothing much to do. Thaman’s music is another major plus for the movie (but pops up at regular intervals). All the songs are peppy and the background score is pulsating, cinematographer Shakthi shines while Suresh’s cuts help the film to be racy at 152 minutes.

Overall, Vaalu is yet another romantic action entertainer which is watchable just for STR’s energetic screen presence and his comic chemistry with Santhanam.