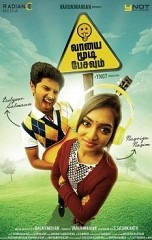 The trailer of Vaayai Moodi Pesavum certainly establishes the quirky idea of the film rather well, but Balaji Mohan proves his creative mettle by showing that his out-of- the-box material can sustain itself for over 2 hours and achieve an emotional connect in the end. He does this with no commercial distractions, no plot misdirection and with a strong whiff of humor..

Apart from the whacky concept, its seemingly quotable animated characters, the locations, color, styling, music by Sean Roldan and the cinematography of Soundarrajan quite simply make Vaayai Moodi Pesavum the coolest film this summer.

Star son Dulquer Salman, making his Tamil debut, rides on the confidence of his Malayalam success and charms his way through as a thoroughly likeable boy next door. As Aravind the chattering salesman, he’s gifted with the power of speech. When he clears his throat a ‘sale’ is eventually made, but this too is subverted humorously by Balaji in a couple of scenes, marking moments of how well the film is written.

Nazriya Nazim plays the role of a reserved doctor Anjana to good effect. Her character prefers to talk less and she’s seen as one of the happiest residents of Panimalai during the dumb flu outbreak. Madhoo's casting in a heart-warming role makes for a delightful comeback and in the scene where she discovers her son’s true talent, her expressions will leave you a little fuzzy on the inside.

The characters of the film serve as a case study of different personalities and conversational styles. Arjun, as Dulquer’s buddy, is short of confidence while speaking with women resulting in a nervous breakdown that has him swearing out of control quite hilariously. Elsewhere the bumbling Sanitation Minister Sundaralingam, played to the T by Pandiaraj, has his own mash-up video on Youtube for his bad choice of words. Then there is Balaji Mohan himself, as an excited news presenter, showing how the media can manipulate what’s being said, again in the most entertaining manner. The tickers on the Prime News network themselves will warrant a second viewing of the film.

The chemistry between the characters, besides the lead pair, be it between buddies Arjun and Dulquer, the couple of Nazriya and  Abhinav, the Nuclear star John Vijay and sparring union leaders played by Robo Shankar and RJ Ramesh, and even Pandiaraj and Kaali click big time, offering quite a bit of laugh out loud moments at regular intervals.

The unsuspecting humor of the film, particularly in the first half is a huge strength while the sudden twist of fate creates a surreal tension of a different kind to the audience in the second half, though the humor quotient is still maintained high with a series of charades that draw some excellent performances from its actors.

Musically, Sean Roldan keeps the score light on its feet for it to traverse from jazz to rock to classical in a flick of a switch. The second half offers great scope for him and he ensures an inclusive place for his music in the narration.

Much like how Anjana tells Aravind that his strength is not in his ability to convince through speech but rather his good intent, the film too opens up in the end to go beyond its strong concept to show that its true essence lies in having its heart in the right place.

Verdict: With fiction, comedy and experimentation, Vaayai Moodi Pesavum will be one of the coolest movies to come this year.
Powered by