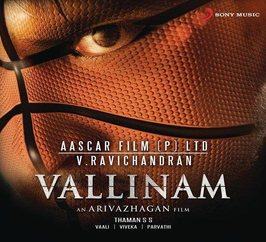 
Sports based movies are rarely made in Kollywood. Vennila Kabadi Kuzhu was the last popular movie in the genre made in Tamil films. Now, Vallinam, which has been in the cans for a last few years, is the latest film on the same genre.

Some tales never get old and when it comes to the rise of an underdog, people always root for them. After a very successful maiden, Eeram, director Arivazhagan explores another new genre, sports drama. Produced by Aascar V Ravichandran, Vallinam features Nakul and Mrudhula Bhaskar in the lead.

Although being in the cans for a very long, Vallinam doesn’t feel dated (Except for one sequence where there’s a mention of Avatar 3D running in the theaters). The movie talks about the extensive domination of cricket and the negligence of other sports and sports persons in our nation. In short, Vallinam is the tale of creating an identity for a sport that is not cricket.

Nakul takes the character personally and brings out a heartfelt performance. His athletic frame and charisma fit the bill right and it appears as if he has worked on his voice too, which sounds much deeper in this movie. The attitude with which he carries himself and the effort he has put in to make his basketball skills look real is commendable. However, his dialogue delivery in the climax sequence, where he attempts to inspire his team mates, appears less realistic, even though it doesn’t fail to make the required impact.

On the other hand, debutante Mridhula Bhaskar plays the standard Tamil cinema heroine, who sizzles in the songs and acts as the driving force behind the hero. Although a promising start, the actress might do herself good by loosening up a bit.

Jayaprakash plays the millionaire father of the heroine. It is good to see how an actor could be so flexible to suit any kind of roles, be it a sleek business man or an unkempt local. In a nutshell, this man has style and the stuff to essay any character.

Jagan and Amzad appear as Nakul’s close pals and although the origin of the strong relationship between the three isn’t explained enough, Arivazhagan has made sure that it takes the movie forward. A very underrated actor that he is, Jagan makes his presence felt all through the film. His counters are spontaneous and very natural. Not sticking to calling names based on physical attributes, the comedian has come up with some very sensible counter dialogues.

Atul Kulkarani makes a brief but impactful appearance as sports trainer in the movie. The other important character in the movie, Vamsi (portrayed by Siddharth), is a cricketer and the antagonist. His crisp expression and mean demeanor go well with the character.

One of the greatest assets to the movie is cinematographer Bhaskaran. Not only has the sports based theme given him an opportunity to flaunt his finesse over the craft, but also helped him use some very innovative shots during the ball games. He has played with the colors big time. His work in the friendship song is noteworthy and his choice of going with minimum hues and faded tones for the romantic number look very attractive. However, the excessive usage of shadows in the first few minutes of the movie makes it hard for the viewers to identify the actors. Also, a portion of the Maaman Machan song was in monochrome and the reason behind this remains unexplained.

The other highlight of the film is Thaman’s music. Both his songs and the background scores are effective. His experiments with instruments with low decibels and some interesting devices like a conch, for the BGMs, find the spotlight.

Few of Arivazhagan’s dialogues grab applause too. His views like, “The fault lies with the sportsmen and not the sports. With more sponsorships and money, the mentality of the sportspersons change” and “You stood up for the right thing. So you are my friend”, will be the favorites.

However, there are few things Arivazhagan could have done away with. Firstly, the romance. Not only was it not necessary for the story, which already has enough to keep the audience pinned, but was also jumpy.  There are also other stereotypes in Vallinam. To name a few the overall characterization of Vamsi, introducing a noisy rowdy just for the sake of proving the protagonist’s physical strength and aversion against public indecency are vintage style.

On the other hand, the director must be applauded for the efforts he has taken to show authentic basketball game. Vallinam is arguably one of the best sports films in Tamil Cinema in recent past.

What is surprising though, is that in the end credits of the movie, photographs of prominent sports personalities like Sachin Tendulkar, PT Usha, Naren Karthikeyan, MS Dhoni, Kapil Dev, Vishwanathan Anand and Leander Paes appear as a tribute to them which includes Ajith Kumar, who participated in professional car and bike races.

To sum up, Vallinam can dunk you into nostalgia and definitely make you want to take to the court. Watch it for the spirit of the game and for the spirit with which each of Arivazhagan’s team has performed.

VERDICT : WORTH TO WATCH WITH FEW UPS AND DOWNS.
Powered by