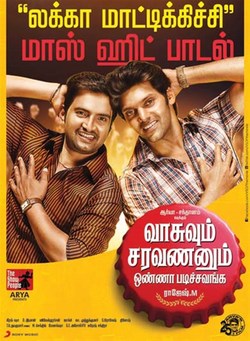 
Watching a Rajesh film is like buying an iPhone. With every new model, the changes are very minimal and the features remain the same. But it feels good to buy the latest version. Rajesh new film Vasuvum Saravananum Onna Padichavanga (VSOP) delivers what we expect from the director– a brainless, time pass, popcorn entertainer!

Just like any other Rajesh movie (read Siva Manasula Sakthi, Boss Engira Bhaskaran, Oru Kal Oru Kannadi), the basic wafer-thin plot of VSOP goes like this—Vasu (Santhanam) and Saravanan(Arya) are close buddies who run a mobile shop.  But when two girls Seema (Banu) and Aishwarya (Tamannaah) enter their life, life changes. The rest of the film tells us how Vasu and Saravanan struggle to keep their friendship going.


VSOP is definitely not out of the box, it’s not a film which is going to take Tamil cinema to the next level! There is nothing new in story or presentation and quite a few scenes which make you cringe too. But the director tries hard to keep the audiences entertained  with Arya and Santhanam jokes, but some of them are as stale as yesterday’s Sambar!

It’s good to see Santhanam back to doing what he is best at. He is there in every scene and is virtually the hero of the film.  Arya is obviously piggy back riding on Santhanam  with his ‘I’m so cool’ attitude. Arya says punchline comedy dialogues like ‘Sema Kalaai Machi …Sema Kalaai’, but nowhere near the comedy dialogues in the director’s earlier films.

Tamannaah looks pretty and her effort to learn Tamil must be lauded. Though someone has dubbed for her, her lip-sync is perfect which has become a rarity in Tamil cinema. Easily, VSOP is by far the finest performance from Vidyu Raman, especially the ‘Kaalai’ portion with her family comprising of Swaminathan and Siddharth Vipin is laugh riot.

VSOP’s another biggest strength is Nirav Shah’s cinematography and his crystal-clear visuals give grandeur feel to the film.  Two songs—‘Subscriber’ and ‘Luck ah Mattikuchu’ are hummable in Imman’s composition but the background score is not up to the mark.


Overall, VSOP is an uninteresting story told in a predictable manner which may appeal to few mainly because of the cheerful Arya- Santhanam combo and Rajesh’s trademark comedy! From the clumsy plotting and a manipulative screenplay and an uninspiring background score, there’s little to recommend in this movie.