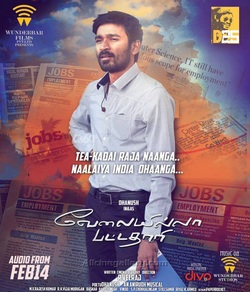 Dhanush's 25th film, Velai Illa Pattathari, hits the screens today amid much fanfare and pre-release hype. As the title says, VIP is about a jobless engineering graduate Raghuvaran (Dhanush) who is waiting for his big break in his preferred civil engineering space. He is ridiculed by his dad for being a loser while his younger brother rises fast in the IT space. We also have his loving mom who is his pillar of support and the neighborhood girl friend who falls for him.

Till about the interval point, VIP majorly focuses on Raghuvaran's relationship with the aforementioned characters. And inevitably, we have the underdog slowly earning his stripes after a long and patient wait, and there are the quintessential villains too, who look to cut short his surge forward.

There is a sense of 'deja vu' with the first half as we have seen Dhanush in such characters in movies like Polladhavan, Yaradi Nee Mohini and Padikathavan to name a few. But the entertainment quotient never dips and Dhanush keeps his fans hooked through something or the other, with Anirudh's crowd pleasing chartbusters leading the way. Dhanush's comic timing is impeccable and his banter with mom Saranya Ponvannan and girlfriend Amala Paul takes the movie forward merrily. His 'dabba vandi' is a character in itself and we make a connect with this cute moped straightaway.

Samuthirakani gets a few scenes to show his solid acting prowess and the father-son relationship is firmly established with strong dialogues. Among the newcomers, Hrishikesh as Dhanush's respectful younger brother passes muster while Amitash as the 'Amul Baby' villain just can't hold himself against a powerhouse performer like Dhanush. The villains are a weak link here as Dhanush doesn't have any formidable obstacles in his path. Probably, they have been watered down deliberately to add even more luster to Dhanush - 'The Star'

Amala Paul's beautiful eyes serve her well and her chemistry with Dhanush is easy on the senses. Surabhi is somehow fitted into the script but the way her role has been showcased isn't convincing. The lip-sync of the lead ladies could have been monitored better. Saranya Ponvannan has patented such mother roles and you can't find a single glitch in her spotless performance. Vivek's one-liners make a mark on a few instances.

Coming to the biggest pillar and the name and face of VIP, Dhanush. His screen presence seems to have gone to the next level and you get the feeling of seeing a mass hero who is comfortable and totally in control on screen. The way he smokes, his stylish walk, the 6-pack finale, his ease in the stunt scenes (with the 'VIP' kick standing out) and his 'superstar swag' are a delight to his ardent fans, who have every incentive there possibly is, to catch their idol on the big screen. His long monologue about the travails of a humble and hard working engineering graduate who has come up the hard way, is 'ear-drum exploding' stuff. VIP should turn out to be that much-needed superhit for Dhanush at the box-office.

Anirudh deserves credit for keeping the audiences thoroughly entertained with his songs and his BGM lifts all manner of scenes. 'Amma Amma' is a moving experience while the title song is all adrenaline and tempo. But in a few odd scenes, one may feel that Anirudh could have added a bit more to the overall experience.

Visually, there isn't anything out of the ordinary and the camera work is functional. The overall movie doesn't drag one bit and the team deserves credit for keeping the audiences bound to their seats even during the film's low-key moments. The numerous 'jump and roar' moments have probably done the trick.

On a script level, VIP makes a few valid points about a section of engineering students who strive to put their degrees to good use professionally and not just use it as a tool to land a plum, well-paying job in the IT space. A few topical incidents have also been touched upon relevantly by Dhanush and Velraj. In fact, VIP has been designed as an ode to engineering graduates and should work wonders with this crowd particularly.

So, our message is clear. Watch VIP within the next few days in theaters when they will be brimming to their capacities and the atmosphere ought to be carnival-like. It entertains in a big way and Dhanush fans couldn't have asked for a better treat from their star. That said, the team has taken cinematic liberties generously in their quest to present a 'paisavasool' star-vehicle.