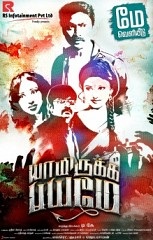 Debutant director Deekay’s Yaamiruka Bayamey is essentially a horror comedy that can literally be broken down into two parts – one for horror and the other for comedy. The audience is treated to the humor element first as the film begins its proceedings. But the director’s comic sensibilities do take a while to warm up to, especially when the timing and the delivery of the punchlines lack the necessary intensity in the early stages. Only with Karunakaran’s entry as the broken down hotel’s manager is there a certain consistency in that specific department.

Also, the idea of an adult comedy is an untapped area in Tamil cinema, and the film makes no bones about its U/A certification, using the opportunity to resort to sleaze upfront. Nevertheless, the film enjoys a facelift with its production value, appealing visuals courtesy Raamy and slick packaging by Sreekar Prasad.

Kreshna does his best to gel with his co-characters on screen. His character, Kiran, is offered scope to be expressive which the actor makes use of. Rupa Manjari enjoys the same acting scope for her character, Smitha, and she does her bit rather well. It appears that since Oviya’s character is that of a bimbo, her parts were free to be underwritten.

The horror element of the second part of the film however works better and binds the film and its characters effectively. It also reinforces the film’s certification that the sometimes disturbing visual content is not for young children. The expected suspense requirements of a horror flick are well realized even though they may not be overly unique. It is still the gag of having people appear out of closets and missing frames but it’s their inclusion into a humorous script that serves as an important misdirection and eventually making a difference to the whole narration. Good make-up and spotless VFX by Lorven Studios certainly play their part in drawing the screams from the audience.

Apart from Mayilsamy’s introduction through song, the other tracks, though filmed and choreographed well, seem unnecessary to the sequence of events. Still, the film is likely to keep your eyes and ears open for strange happenings. Even the convenient closure in the end is hardly a gripe.

Even though the film has some moments that can give you the chills, it’s easily subsided by the ludicrousness of the characters, which kind of makes the comedy steal the horror’s thunder when it really feels like it should be the other way around.

Verdict : Horror that works to a larger extent with infrequent bursts of comedy.
Rating :  2.7 /5.0
Powered by