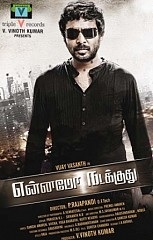 Yennamo Nadakuthu has a lot happening around the movie right from the word go. The movie marks the comeback of Vijay Vasanth, who has grabbed the opportunity to hit the screens with a bang. He plays the role of a poster contractor based in Chennai, whose life revolves around his mother and friends.

Director Rajapandi has made sure that the dialogues have a realistic North Madras slang and the actors have delivered them perfectly. Vijay Vasanth shares an interesting Mother and Son relationship along with Saranya Ponvannan that has its own slices of sentiment and comedy. Saranya Ponvannan plays her part with adequate realism and her Chennai slang is an absolute delight to listen to.

The ups, downs, twists and turns in the script make the movie interesting to watch and  takes it to a pacy finale that might make the audience forget that their seats have push backs. The director has placed some of the leads pretty neatly in the initial portions of the script and the unwinding of those leads in the climax sequence shout out the subtle brilliance in the scripting.

Premgi Amaren proves that his back ground music has got a sufficing amount of adrenaline that would keep you pumped up till the end. Vijay Vasanth’s acting is mature and level-headed and he has made sure that there weren’t any unwanted over reactions to the incidents that happen to him as the movie progresses.

The movie has a fair amount of surprise elements which could have pushed those eyes wider, had Rajapandi concentrated on proper placement of songs, which change the pace of the script.

Rahman, Suganya, Thambi Ramaiah and Prabhu hold the movie together, performing their parts with ease and grace. Mahima Nambiar, the female lead in the film, is an ambitious nurse and her role has a good part to play in the script, unlike the usual heroine roles that appear only in songs and candy floss romance scenes.

The fight sequences have also been choreographed with a commonsensical approach that makes the climax more racy and gripping. Although the movie has a few pinches of cinematic elements here and there, the perfection in the script and the flawlessness in the execution allows the movie to take a step up.

Produced by Vinoth Kumar under the banner Triple V Records, Yennamo Nadakuthu has proven to be a convincing outing for Vijay Vasanth and team.

Verdict: A racy movie with a realistic approach
Powered by