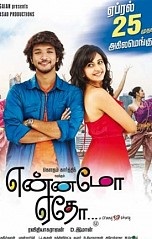 Gautham Karthik is back with his second movie as a lead hero; Yennamo Yedho which happens to be the remake of the Telugu movie Ala Modalaindi. Rakul Preet Singh and Nikesha Patel are the 2 female interests in this rom-com directed by Ravi Thyagarajan.


The story is a familiar one of two strangers meeting, interacting and gradually falling in love. If it’s a love story, there has to be some conflicts, confusion and drama to up the excitement for the viewer. Yennamo Yedho also follows a similar ‘tried and tested’ routine before the expected ‘all is well’ ending.


Yennamo Yedho has to its credit a likable lead pair, in the form of the energetic Gautham Karthik and the ravishing Rakul Preet. The two look good together and also pass muster in the acting department. Their chemistry in their combination scenes is evident and provides the movie with some impetus. Gautham ticks all the boxes which are expected out of a young hero and will score high with solid scripts. He has good screen presence and reminds us of his dad with his diction.


Rakul is not just a beautiful young lady but also emotes pretty well and gets her lip sync right, more often than not. Nikesha is relegated to a pretty minuscule role (with a song sequence) but she is another attractive introduction to the Tamil audiences. She definitely has to work on her acting!


Veteran actor Prabhu, sporting a salt and pepper look, plays a hitman who journeys along with Gautham right from the beginning of the movie. Though he comes across as too boisterous with his histrionics, the masses are bound to be entertained with his role which provides a little surprise. Anupama Kumar plays the quintessential Tamil cinema mom who is cool with her kid and provides some mushy moments to the movie. Mano Bala and Shakeela make an appearance in a needless little segment which is in pretty bad taste and could have been eschewed.


All the little known actors who play Gautham’s friends are amateurish whereas an actor, Ramesh enlivens the proceedings in the climax with his loud, drunken antics. This episode is among the movie’s few entertaining ones.


Imman’s score is the movie’s biggest takeaway. Though his numbers such as ‘Muttalai’, ‘Nee Enna Periya’ and ‘Shut up your mouth’ look and sound good as standalone songs, they don’t necessarily gel with the movie’s flow. The other technical aspects of the movie are functional.


On final analysis, Yennamo Yedho has very few gripping scenes and doesn’t make the connect with the viewer. Its pace is laborious and the romance that is portrayed is nothing new to the viewer. The so-called twists are also predictable and artificial. At the end of it all, inspite of the refreshing lead pair, the movie leaves you weary.


Verdict: A below par rom-com
Powered by